The following article was featured in Recycling Today’s April, 2014 issue 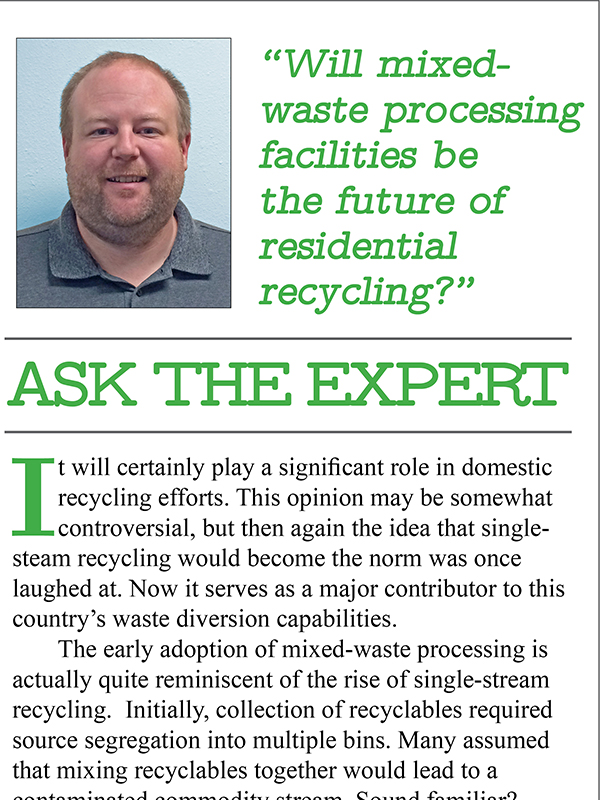 Question: “Will mixed-waste processing facilities be the future of residential recycling?”

It will certainly play a significant role in domestic recycling efforts. This opinion may be somewhat controversial, but then again the idea that single-steam recycling would become the norm was once laughed at. Now it serves as a major contributor to this country’s waste diversion capabilities.

The early adoption of mixed-waste processing is actually quite reminiscent of the rise of single-stream recycling.  Initially, collection of recyclables required source segregation into multiple bins. Many assumed that mixing recyclables together would lead to a contaminated commodity stream. Sound familiar?

Simplified collection systems provide lower collection costs, fewer trucks on the road, and centralized tipping locations. However, the largest benefit may be the impact on participation rates. One bin means 100% participation, providing processors with access to all of a community’s recyclables.

With 100% participation and technology that captures up to 95% of high value recyclables, communities can now divert more than 75% of one-bin materials from landfill. This technology is available today. At BHS, we’re doing things that were considered impossible just a decade ago. Screening, air and optical sorting technology are being applied to sort mixed waste, and the results are outstanding.

Even more exciting, through the advent of dry anaerobic digestion we are now able to “close the loop on recovery.” Simply stated, this means utilizing the resources extracted from mixed-waste processing to power the MRF and the collection vehicles.

Moving to one-bin collections and mixed-waste processing can seem counter-intuitive after decades of education and training on source separation. Communities like San José and Montgomery lead the way by diverting more than 75% of their solid waste while recovering recyclables, creating renewable energy and preserving finite landfill space. I suspect others will soon follow.